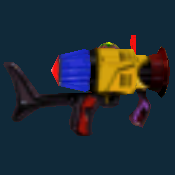 The Nerf Cannon is a grenade-launcher type blaster. It is the only blaster that uses Nerf Balls and has a capacity of 15. It is one of the five non-existing blasters.

Description: Fire a ball that explodes in a large blast when it touches another player.

Description: Fire a ball that can explode when it touches another player, or when you press Alternate Fire again. Does not use extra ammo when exploding.

No bugs are currently known of the Nerf Cannon.