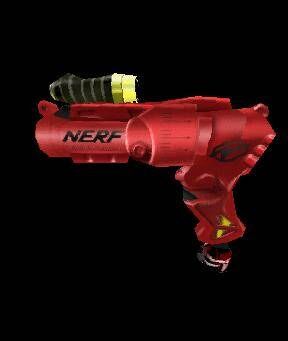 The Secret Shot, also known as the Secret Shot II, is a pistol-type gun with infinite ammo and is the default weapon for most of Nerf Arena Blast's game types. It is red with black accents and is based on the real NERF blaster of the same name.

Description: One luminescent orange dart at a slightly slower pace than primary fire.

While using the Secret Shot in game, the HUD will display infinite ammo remaining at all times. However, the graphic meter will show the ammo drain to no less than 10 if using primary fire, and no less than 5 if using alternate fire. This may not be as much a bug as a clever script work-around with overlooked consequences.