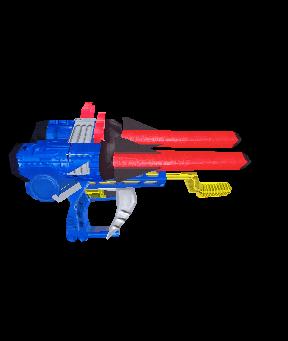 The Triple Strike is a rocket launcher-type gun and is often considered the most powerful weapon after the Whomper. It uses rockets, it can fire 3 darts before reloading and its capacity is 30. It is based on the real NERF blaster of the same name.

Description: Fires a single rocket that makes a medium blast.

Description: Fire all remaining rockets until next reload, up to three can be fired. It is easily possible to tatg out someone, or a group of players, in one shot.

No bugs are currently known of the Triple Strike.